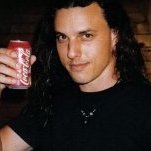 Grosser Kaiser - first half of the 20th century mod.