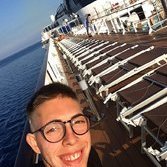 By Claudio Albanese, September 23 in Help