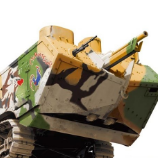 “And so it was the the Dawn of an Era, where as some nations may find their place in the sun, others would simply fall into darkness” Scenarios and Mods involving the famous 1830~ start date are

Final map for this version of the scenario, direct screenshot from the android port. So yeah, it’s finally here. The “Victorian Age” Scenario’s beta version. The first release of “Dawn of A New E

Hello, and welcome to the second entry of “To-Fix”, where I explain different aspects of the errors, plans, and some more about this scenario and the future of it as a mod. A.    Central America