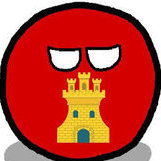 Some changes in the provinces of Spain