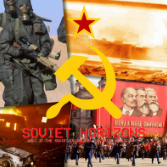 SOVIET HORIZONS: What if the Soviet Union won the Third World War?

By BackToTheBrickStudios, September 23, 2022 in Mods

(FORUM INFO IS OUTDATED, ALL INFO ON POST WILL BE UPDATED SOON) SOVIET HORIZONS IS A MOD FOR AGE OF HISTORY II THAT ASKS THE QUESTION: WHAT IF THE SOVIET UNION WON THE THIRD WORLD WAR? The y