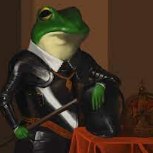 I'am currently working on this Lord of the Rings themed Mod for Age of Civilisations II. It Will feature:   1. A large Map with several Thousand provinces.  2. An abundance of diff

Gondor und Arnor with all their Core Territory